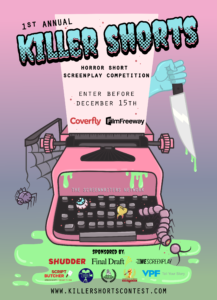 In the past few years, horror shorts have become a goldmine for Hollywood. Feature films such as The Babadook, Lights Out, Mama and Saw originated as proof-of-concept shorts. Shorts like Whisper, The Burden, Behind, Sweet Tooth, and Milk, were discovered by producers like James Wan and Sam Raimi and are now in development as features.

It all starts with the script.

Killer Shorts was created to discover, inspire and promote emerging screenwriters around the world as we dig up the freshest new voices in horror. We’re passionate about horror and all its sub-genres! Horrifying monsters, psychological terrors, hilarious horror comedies, creepy creatures…whatever your dark & twisted mind can imagine! 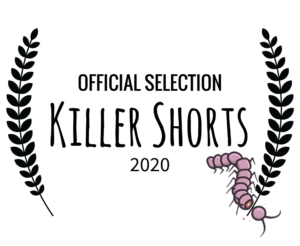 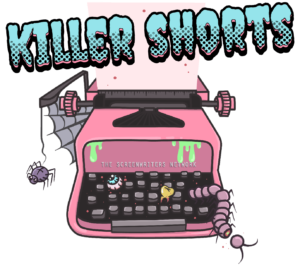 Killer Shorts is proud to partner with a network of literary managers, agents, executives, and producers who are actively seeking fresh voices in horror screenwriting and recognize the potential in short form content as a way of breaking into the industry. They have a proven track record of discovering talent via their horror shorts, including Leigh Whannell (Saw), James Wan (Saw), David Sandberg (Lights Out), Angel Gómez Hernández (Behind), Julian Terry (Whisper, They Hear It), Nico van den Brink (Sweet Tooth, The Burden), and more.

The Top 3 scripts will be read by agents, managers and producers at the following companies:

Shudder is the premium service for fans of horror, thrillers and the supernatural with an unbeatable selection of exclusive new releases and genre-defining classics, handpicked and updated weekly, available on most streaming devices in the US, Canada, the UK, Ireland and Germany. To learn more, visit www.shudder.com.

All members of The Screenwriters Network will experience Shudder commitment-free for 14 days.